Are we doomed?  Have we messed up the Earth beyond all hope?  News reports about the environment would sure make you think so.  From CO2 emissions to deforestation to species extinction; you name it, it seems like humans are totally screwing up the planet.  It’s hard to even understand the problem fully.  So many things are happening at once, all of them bad.  And everything is connected to everything else, tangled together in a great big ecological hairball.  Worse, it seems like we’ve only got about 30 years to turn things around or the Earth may become inhospitable to human life. What are we supposed to do?  Where do we even star? 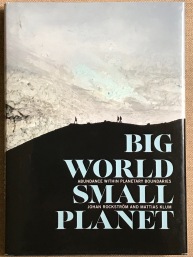 Big World Small Planet: Abundance within Planetary Boundaries aims to answer these questions.  It’s surprisingly optimistic.  Published in September, 2015, just a few months before the United Nations COP21 Conference on Climate Change, Big World Small Planet does not sugar coat the problems.  They are urgent and daunting.  But the authors, Johan Rockström and Mattias Klum, offer a brilliant framework for understanding and tackling the threats we face.  That framework is the idea of planetary boundaries.

Johan Rockström  is a scientist, professor and director of the Stockholm Resilience Center.  He’s an expert on global sustainability.  He and his worldwide team of researchers are responsible for the technical and scientific work underlying planetary boundaries.

Mattias Klum is a wildlife photographer and filmmaker.  His rich photographs fill the book with stunning images that capture both the at-risk beauty of the natural world as well as the brutal ugliness of environmental destruction.

The central message of the book is that planetary boundaries – there are nine of them – form a “safe operating space” for humanity.  If we can stay within these boundaries we have a chance of a sustainable and even a just future.  Exceed these boundaries and we will cause the Earth’s ecological system to become destabilized, wildly unpredictable, and possibly even hostile to human life.

The nine planetary boundaries are:

The research underlying the book has been going on for several years; first to identify the boundary indicators and then to determine what their threshold levels should be.  Rockström and Klum caveat that these levels are estimates, based on today’s best available research.  Some are firmer than others, like limiting atmospheric CO2 concentration to 350 ppm.  No doubt they’ll be refined and improved as research continues.

The point is, we’ve already exceeded several of them.

Governments can use the framework of planetary boundaries to set policies and guide legislation.  The book argues pretty strongly, for example, that we need to put a price on carbon emissions.  Business and the scientific community can focus research and development efforts based on planetary boundaries.  One example: if we want to feed Earth’s growing population without cutting down our remaining forests we’ll need to roughly double the crop yields of our existing farmland.  How will we do that?

Living within planetary boundaries will clearly require huge, disruptive changes in how we live and work, consume and produce.  Getting off fossil fuels entirely is just one of those changes.

However, the first step Rockström and Klum urge, is a change in mindset.  We must stop regarding the planet and its resources as an “externality”, something separate from or outside ourselves, something that has “an endless capacity to take abuse without punching back.”   Our society and economy are nested within the environment and cannot exist without it.   They argue we need a new narrative,

“… a positive story about new opportunities for humanity to thrive on our beautiful planet by using ingenuity, core values, and humanism to become wise stewards of nature and the entire planet.”  [p. 11]

Here’s one new (at least for me) way of thinking about this: the Earth provides an incredibly valuable set of critical “ecosystem services,” such as CO2 absorption by the oceans, water filtration by wetlands and marshes, and crop pollination by bees. The book cites estimates that these services contribute 1 or 2 full percentage points to world GDP.  It even suggests a new metric GEP – gross ecosystem product – to track the rise and fall of this natural capital.

Humans have been exploiting and over-using these ecosystem services past the Earth’s capacity for resilience, to the point of collapse.  It’s time we recognized the value of these services, started managing them, and in some cases paying for them.

We must also move away from an altruistic notion of protecting the environment to becoming stewards of the planet.

“Becoming planetary stewards means recognizing that our grand challenge is not about saving a species or an ecosystem.  It’s about saving us.”  [p. 127]

Big World Small Planet is cautiously yet refreshingly optimistic about the possibilities for social change and technological innovation.  Rockström and Klum are not Malthusians by any means.  They advocate growth, but within limits, within the safe operating space of planetary boundaries.

This is one of the most important books I’ve read in years.

The concept of planetary boundaries is one of those brilliant, compelling ideas that seems blindingly obvious after you’ve learned about it.  It’s a powerful organizing paradigm for thinking about and taking action on the environment.

Big World Small Planet catalogs the challenges we face, warns starkly about the consequence of inaction, yet still provides direction and some much needed hope that we can rescue ourselves and our planet.

The Nine limits of our planet …. and how we’ve raced past four of them:
http://ideas.ted.com/the-9-limits-of-our-planet-and-how-weve-raced-past-4-of-them/