Photo by Pixabay on Pexels.com

Week 3 of Nonfiction November is hosted by Rennie @ What’s Nonfiction. And the prompt is:

Over the past couple of years I’ve been trying to learn more about sustainability.  Humanity isn’t acting fast enough or boldly enough on climate change and other environmental issues.  But even just understanding the problems is daunting, let alone taking meaningful action.

I won’t claim to be an expert, but I’ve now read enough that I can at least recommend a few good books. 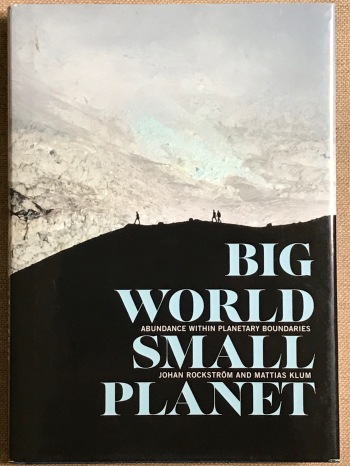 A great book to start with is Big World, Small Planet: Abundance Within Planetary Boundaries.  This is the book where I first learned about the idea of planetary boundaries. These are the upper limits on how far we can stress Earth’s critical ecological systems. Keeping average global temperature to no mare than 1.5C above pre-industrial levels is one boundary. Johan Rockström, director of the Stockholm Resilience Center, outlines nine of them. Together they form a “safe operating space” for humanity.

If we can live within these boundaries, we have a chance of a sustainable and even a just future.  Exceed these boundaries and we will cause the Earth’s ecological system to become destabilized, wildly unpredictable, and possibly even hostile to human life.

The book is beautifully illustrated with photographs by Mattias Klum. 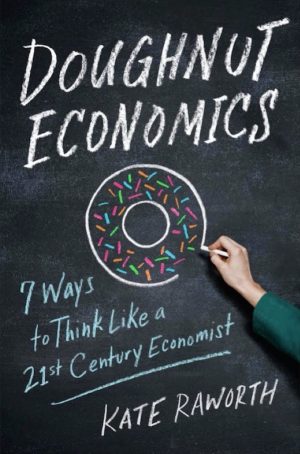 If the planetary boundaries form upper limits that we must not exceed, then the United Nations Sustainable Development Goals adopted in 2015, form a floor or a foundation for addressing hunger, poverty, disease, illiteracy and other social development issues. Taken together (and bent into circles) these two sets of boundaries form a doughnut, a “safe and just space for humanity.”

In Doughnut Economics, Kate Raworth, an economist at Oxford University, presents both an in-depth critique of economics as a whole, and a framework for thinking about economics in a new sustainable way. One key message is that we need to move away from our “take-make-use-lose” pattern of consumption towards a more circular flow of resources.

Living within the Doughnut is the task Raworth sets for us. As I mentioned in an earlier Nonfiction November post, Doughnut Economics is the most important and far reaching book I’ve read in 2020. 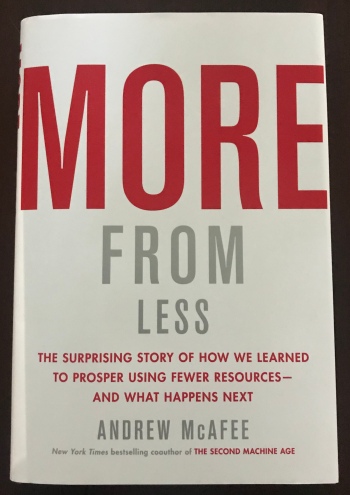 One thing we must do in order to live more sustainably is to consume less of the Earth’s resources. Good news: we’re already starting to do this.

More From Less, by MIT researcher Andrew McAfee, examines a growing trend called “dematerialization,” producing the same goods from less material and energy.  For example, McAfee asks us to consider the humble soda can. Back in the early 1960’s aluminum cans weighed about 85 g,  By 2011 they weighed just 12.75 g. We now use about 80% less metal – less material — to make a can.  The soda can makers did this to cut costs, but it has environmental benefits too.

McAfee is unabashedly pro-capitalist and he takes the time to carefully define what he means by “capitalism.”  Still he’s not opposed to appropriate government action either, such as a tax on carbon emissions. Instead, he argues that combined with the right policies, dematerialization can enable us to have both continued economic growth and a sustainable environment.

I think he overstates the case for dematerialization, but it’s real and it’s a step in the right direction.

A Life on Our Planet 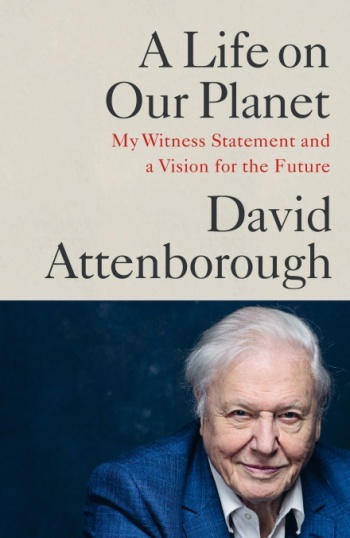 I’ll end with a book that I’ve just started reading: A Life on Our Planet by David Attenborough. The book is a companion to the Netflix film of the same name. So far it’s both autobiography and an environmental vision statement.  He has seen so much of the world and witnessed so much change during his lifetime that his perspective is invaluable.

And what a lifetime! The man is 94 years old! I’ll consider myself lucky to live that long, let alone have the physical energy and mental clarity to write books and go traipsing off around the planet.

I’ll post a full review when in a week or so once I’ve finished reading.

I still want to learn more. So if you can recommend any books on sustainability, especially on concrete steps individuals and families can take, please leave a comment.