Wow! What a marvelous magical book to close out this tumultuous year! 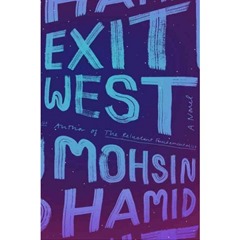 Nadia and Saeed live in an unnamed city in an unnamed country, perhaps in the Middle East, or maybe Afghanistan or Pakistan, or possibly anywhere, that is being torn apart by violence. The danger is distant at first, and sporadic, but gradually it encircles and finally sweeps over them.

They escape through a mysterious black door which transports them instantly and safely to another part of the world.

Exit West tells the story of the young couple, how they are changed by and respond to their experiences in their new home. At one level it’s a typical story of migrants as strangers in a strange land.

But Nadia and Saeed are just two out of millions who move through the black doors that have begun to appear all over the world, a mass migration of people leaving behind violence and terror and also family and familiarity, a flow of humanity unstoppable and utterly unimpeded by distance or borders. Parks, greenbelts and hillsides become transformed into tent cities and shanty towns. Everyone must adapt.

Exit West show us people who sever all ties with their homeland when they migrate and others who remain tethered to their original homes by memories, sentiment or nostalgia. Some don’t move at all but feel as if they’ve migrated because everything around them has changed so much that home doesn’t feel like home anymore. And of course we’re all migrants through time. We all leave behind one generation and are left behind by the next.

The book is wonderfully written. Hamid portrays the gradual encroachment of violence, then terror, and eventually destruction on Nadia and Saeed’s once peaceful city in a way that made me feel it happening around me, that made me realize how easily it could happen anywhere, even here. And I loved how Hamid’s beautifully constructed paragraph-long sentences swept me along, sometimes leaving me breathless.

Almost everyone in the story, from Nadia and Saeed to the police and “native” populations of the host countries somehow manage, with difficulty and with some exceptions, to restrain their worst passions. Slowly, tentatively, and with a lot of hard work they settle in and start to reorder their world. It’s fiction but so very pertinent and in the end left me feeling hopeful.

I hope Exit West gives you as much inspiration to start off the New Year as it gave me ending this one.