Lots of people warned us about the possibility of a global pandemic years before the outbreak of COVID-19. But we didn’t listen and we didn’t prepare.

We’ve known for decades about the catastrophic effects of greenhouse gas emissions on Earth’s climate. We are starting to listen and act, but we’ve left it dangerously late.

Why do we do this to ourselves? Why do we so often fail to take action on these and other long-term threats?

One reason is that most of the time, most of us are caught up in the short-term, in the here-and-now, and we don’t really know how to think about global scale long-term problems.

The Good Ancestor: A Radical Prescription for Long-Term Thinking by Roman Krznaric shows us how to think long-term by teaching us to be better ancestors to future generations.

Roman Krznaric (pronounced kriz-NAR-ik) is a public philosopher who grew up in Sydney and Hong Kong. He studied at Oxford University and earned his PhD in political sociology at the University of Essex.  He’s the author of several books and a research fellow at the Long Now Foundation. 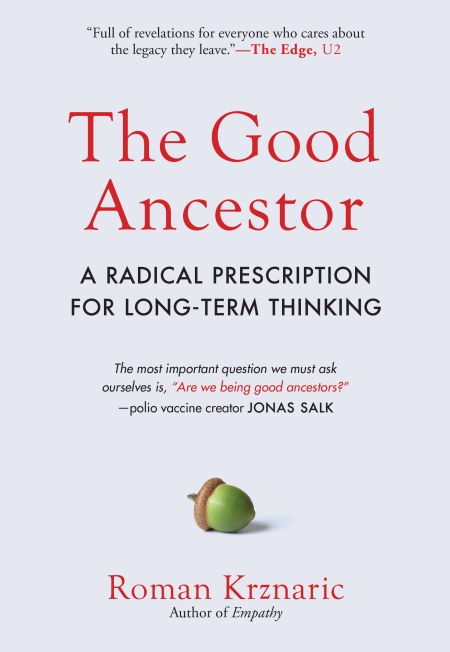 The Good Ancestor: A Radical Prescription for Long-Term Thinking
By Roman Krznaric
The Experiment, New York, 2020

I first learned about the idea of being a good ancestor from Bina Venkataraman’s book The Optimist’s Telescope: Thinking Ahead in a Reckless Age (book, review). She suggests that we should think about the Earth as if it were a precious family heirloom; something to be used but also cared for and passed on to future generations. We should aim to be good ancestors, she says, by preserving for our children and grandchildren the resources and the freedom to make their own choices for themselves and for their children.

While The Optimist’s Telescope takes a journalistic approach, Krznaric’s The Good Ancestor is more prescriptive: it provides a toolkit of six different ways to develop long-term thinking.

The book is divided into three parts. First, Krznaric looks at the question of whether humans are even capable of long-term thinking. Good news: we are. He dives into history, anthropology and sociology to show how we developed that capability over millennia.

The second part, the core of the book, is about the six approaches to thinking long-term. I’ll come back to these in a moment.

Finally, Krznaric looks at how small groups of activists, organizers, students and policymakers – he calls them “time rebels” – are putting the six ways into practice in various places around the world.

Krznaric devotes a chapter to each of his six ways to improve long-term thinking. They’re all detailed and interesting. I’ll just summarize them briefly.

The first step to developing long-term thinking, he says, is to stop obsessing about the short term, about the latest meme on social media, the latest fashion trend or must-have gadget, even the latest election cycle. We need to develop deep-time humility, an understanding that all of human history is just an eyeblink in the lifespan of the universe.

Krznaric quotes the writer John McPhee who puts this into perspective brilliantly:

“Consider the earth’s history as the old measure of the English yard, the distance from the King’s nose to the tip of his outstretched hand. One stroke of a nail file on his middle finger erases human history.” [p. 49]

We need to think about time differently. In the modern era we perceive time as linear, like an arrow, but this has disconnected us from natural cyclic rhythms – tides, seasons, lifetimes, generations. Lines can be shortened, he says, but circles are inherently infinite.

Take a walk in the woods and look at the trees, he suggests. Trees are in a sense slow running clocks with their leaves and rings marking the passage of seasons and years. They can be hundreds of years old. Tress can reconnect us with longer-term cyclic time. Maybe, we should start thinking in “tree time.”

The second approach, a legacy mindset, helps us think about how we want to be remembered by future generations and what gifts or bequests we would like to pass on to them. Krznaric emphasizes that the most important legacy is a healthy planet on which future generations can thrive and flourish. This echoes Bina Venkataraman’s suggestion about treating the Earth as a family heirloom.

If you shoot an arrow through the woods and injure someone you didn’t see, you’ll be judged guilty of negligence. To improve long-term thinking, we need to extend our concept of justice across time as well as distance. We need to develop norms of intergenerational justice. Nuclear waste, for example, is like an arrow flying through the woods for thousands of years, posing a constant danger to everyone and everything. So are greenhouse gas emissions.

“We have a responsibility to take action today to mitigate the future impact of the arrows we fire. In fact, the fewer we fire, the better.” [p. 81]

Krznaric urges us to consider the consequences of our actions not just on our children and grandchildren, but on our descendants down to the 7th generation, about two hundred years into the future. And not just our families but all of humanity. 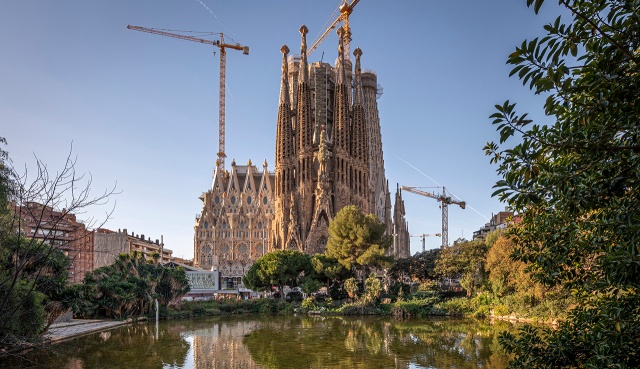 Have you ever been to Barcelona and seen the Sagrada Familia, the basilica designed by the renowned architect Antoni Gaudi? Construction of this amazing building started in 1882 and it’s still not finished. It’s a perfect example of cathedral thinking: the idea of undertaking multi-generational projects. So is planting trees that take generations to mature.

Krznaric’s fifth tool for long-term thinking is holistic forecasting.  How do we plan decades or even centuries ahead?  One way is to consider historical patterns of growth and development. The most prominent of these patterns is the S-curve, also known as the sigmoid or logistic curve. You’ve seen this before: a slow gradual take-off in the adoption of some new technology, say mobile phones, followed by a period of rapid exponential growth, followed by a plateau and sometimes even collapse. Economist Vaclav Smil gives many more examples of the S-curve phenomenon in his encyclopedic book Growth: From Microorganisms to Megacities (book, review).

Nothing grows forever, Krznaric warns, and we should use the S-curve as the template for long-term forecasts.

Finally, to focus our long-term thinking and to be good ancestors, we need to adopt a transcendent goal for humanity. Krznaric advocates the goal of “one-planet thriving”, which means not using more resources than the Earth can generate nor creating more waste than the Earth can absorb.

In practice, it means living within “the Doughnut”; a set of outer boundaries defined by Earth’s critical ecological systems that we must not exceed, and an inner set of goals for human well-being that we must not fall below.  The Doughnut was conceived by economist Kate Raworth and explained in detail in her terrific book Doughnut Economics: Seven Ways to Think Like a 21st Century Economist. (book, review)

Krznaric and Raworth are married, and you can certainly see the influence that each has had on the other’s work. The two of them must have very interesting dinner table conversations.

It’s hard to argue with any of Krznaric’s six ways to develop long-term thinking. They’re all sensible and useful and clearly explained with lots of background deail and examples. And the overarching idea of thinking and acting like a good ancestor is a real paradigm shift.

It’s adoption that’s the problem. How do we get people, especially elected officials and policymakers, to start thinking long-term?  Krznaric gives some examples in the book that are encouraging, but we really need to scale this up. In some cases structural changes to our political systems will be needed. The two-year cycle for congressional elections in the United States virtually guarantees short-term thinking in perpetuity.

Here’s one simple suggestion for long-term thinking that you can start right away: place a leading zero in front of the year whenever you write a date.  Instead of February 28, 2021 write February 28, 02021. Looks different doesn’t it? It tells you that this year is part of a much longer timespan. OK, it’s not going to change the world, but I think it’s a useful mental nudge.

We need to start thinking like good ancestors ourselves. We need to let long-term thinking inform our decisions about what we buy, how we live and who we vote for.

The Good Ancestor is a great guide to getting started.

Future generations have no voice in the actions we take, or do not take, today. Yet they will be profoundly affected. Instead of bequeathing them radioactive waste, acidic oceans and an overheated climate, shouldn’t we leave them a planet that can sustain them, a world in which they and their children can flourish?

How to Be a Good Ancestor
TED Talk by Roman Krznaric, October 02020

2 Responses to The Good Ancestor