If you’re looking for something to distract yourself from the dismal spectacle of the Senate confirmation of Supreme Court nominee Amy Coney Barrett, you might find solace in My Own Words, a collection of essays, articles and speeches by the late Justice Ruth Bader Ginsburg. 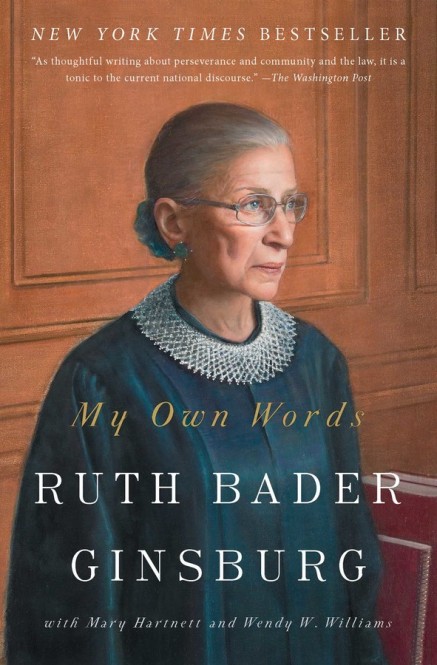 My Own Words
By Ruth Bader Ginsburg with Mary Hartnett and Wendy W. Williams
Simon and Schuster, New York, 2016

The material in this book has been accumulated by Ginsburg’s biographers Mary Hartnett and Wendy W. Williams. It appears they decided to publish this book first, to be followed by the actual biography at some point in future. They provide detailed biographical notes and commentary to set the scene for each chapter and for many of the individual pieces.

The book covers a lot of ground, from Ginsburg’s earliest writings in her high school newspaper right up to summary remarks about the Supreme Court’s 2015-2016 term. It also contains a couple of speeches about Ginsburg written by her husband Marty, who was a tax lawyer.

The book does not include any of her actual written judgements. You can find those on the Supreme Court’s web site at https://www.supremecourt.gov/.

I think the most interesting parts of the book are Ginsburg’s bench announcements which she read when she strongly dissented from the Court majority, and a detailed look inside the inner workings of the Court in a piece called Workways of the Supreme Court.

For someone who dedicated her career and her energies so forcefully and persistently to women’s equality, Ginsburg’s writing is restrained, unemotional, and often quite dry. Other Supreme Court justices, notably her friend and ideological opposite Antonin Scalia, wrote with much greater passion and flair.

Nevertheless, Ginsburg’s impact on the law has been immense. I bought this book as a tribute.