Talking to Strangers:  What We Should Know About the People We Don’t Know
By Malcolm Gladwell
Little, Brown and Company, New York, 2019

I’ve read most of Malcolm Gladwell’s books and quite a few of his New Yorker articles.  I love his podcast Revisionist History.  He is a terrific writer and storyteller.  Though he has a tendency to wander off on maddening digressions, the payoff is usually some profound insight or a fascinating connection that makes you see part of the world in a whole new way.

Unfortunately, the payoff is smaller in his latest book, Talking to Strangers: What We Should Know About the People We Don’t Know. 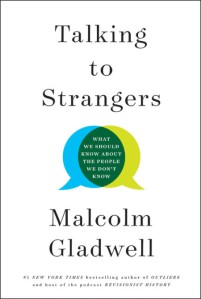 The book starts and ends with the case of Sandra Bland.  Do you remember her?  She was the black woman pulled over by a white policeman named Brian Encinia in Prairie View, Texas for a minor traffic violation in July 2015.  Their interaction became heated, Encinia called for backup and Bland was arrested.  Three days later she committed suicide in her jail cell.

Gladwell uses this case to frame his exploration into why encounters between strangers can be so difficult, dangerous, and sometimes fatal.

He identifies three factors that help answer these questions.

First, humans generally “default to truth:” they operate under the assumption that the people they’re interacting with are telling the truth.  I’ve also heard this called “assuming positive intent.”  Defaulting to truth has incredible personal and societal advantages.  It enables relationship-building, cooperation and collaboration.  In the vast majority of cases, defaulting to truth is the correct assumption.  However, defaulting to truth leaves us vulnerable to that small subset of individuals who are dishonest, like spies, criminals and demagogues.  We are not very good at detecting such people and we often need overwhelming amounts of evidence to convince us of their dishonesty.

“Transparency is the idea that people’s behavior and demeanor – the way they represent themselves on the outside – provides an authentic and reliable window into the way they feel on the inside.” [p. 152]

It turns out that assuming transparency can lead to serious errors in judgement.  Facial expressions and demeanor vary across cultures.  Even within cultures there are people whose behavior and expressions do not match our expectations.  A witness to a murder does not look as grief stricken or as shocked as we expect, so we interpret this as suspicious rather than allowing for differences in personality.  In other words, we assume we are far better at reading people than we really are.

The assumption of transparency may make sense for most of our interactions.  But if you’re a criminal court judge deciding whether to release a prisoner on bail, or a police officer pulling someone over for a traffic violation, or the leader of one country visiting the leader of another so you can “look them in the eye”, then assuming transparency can be a dangerous delusion.  Sometimes meeting someone in person provides more noise than signal.

“Coupling is the idea that behaviors are linked to very specific circumstances and conditions.”  [p. 273]

“The first set of mistakes we make with strangers – the default to truth and the illusion of transparency – has to do with our inability to make sense of the stranger as an individual.  But on top of those errors we add another, which pushes our problem with strangers into crisis.  We do not understand the importance of the context in which the stranger is operating.”  [p. 282]

So when Brian Encinia pulled Sandra Bland over he did not know that her previous encounters with the police had left her owing over $8000 in outstanding fines, or that she had previously attempted suicide following the loss of a baby, or that she had recently moved to Texas from Illinois hoping to make a new start in life.

For his part, Encinia had been trained to not default to truth, to suspect everyone.  He was expected by his superiors to pull people over for minor traffic violations under a policy of aggressive policing known as “stop and search” even though Prairie View was a low crime area.

Talking to Strangers is a quick read despite its 346-page length.  Overall, I found it less satisfying than Gladwell’s previous books.  The arguments do not fit together quite as neatly, and more of the stories than usual seem like distractions, even though they’re well-told.

For example, there’s the Brock Turner case.  He’s the Stanford University student who sexually assaulted a female student at a fraternity party in January 2015. Both were drunk. She was actually unconscious.  He was given a shockingly light sentence.  I’m not arguing with Gladwell’s conclusion that alcohol seriously harms our ability to communicate with each other, including our ability to give consent.  But did he really need an entire 45-page chapter to get there?

More important, I disagree with the premise of his book. I think most of us, most of the time, do just fine talking with strangers.  Yes, we’re imperfect, biased, and over-confident but how often does that actually matter?  The situations Gladwell talks about in the book are extreme edge cases: spies failing to detect enemy agents in their midst, judges misreading violent criminals and allowing them out on bail, cops pulling over innocent people and misinterpreting their behavior.  Hardly any of us have encounters like these, and hardly any of our mistakes have such serious consequences.

These days, we interact with more strangers more often than ever before.  Our cities are becoming more diverse, our work groups often include people from different parts of the world.  We ignore our parents’ dire warnings about the perils of getting into cars with strangers and hop into Ubers and Lyfts without a second thought.  We place ads on Airbnb or Vrbo and invite strangers into our homes.  Some of us even hire them to walk our dogs or babysit our kids.

How is this possible given the dismal picture Gladwell paints about our ability to talk to strangers?  I would argue that we’re actually getting better at talking to strangers.  We’re developing ways to supplement our limited abilities, and to scale up the number of strangers we’re able to evaluate.  We’ve built reputation systems and recommender systems.  Rachel Botsman’s book Who Can You Trust? (book, review) details these new systems of trust.  At work we get training in cultural awareness and implicit bias.  Not everyone, of course – I’m fortunate to be exposed to this due to my job in the tech industry – but it’s becoming more common.

Gladwell does a fine job shedding light on the flaws in how we deal with strangers: defaulting to truth, the fallacy of transparency, and our failure to take context into account.  And there’s no doubt that in certain circumstances these flaws have serious impacts.  I would have appreciated him devoting more of the book to strategies for improving our ability to talk to strangers when and where it matters.