Where the Crawdads Sing

I don’t read much fiction these days, but it’s summertime and the last book I read was about the history of calculus, so I figured I’d try something a little lighter.

This year, on my summer vacation, I read Delia Owens’s novel Where the Crawdads Sing. 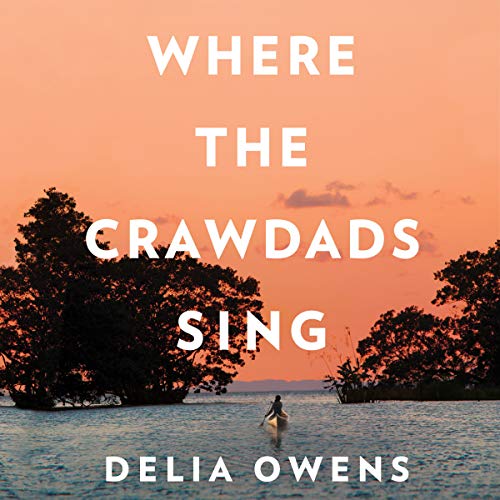 The book, Owens’s first, has been on the bestseller lists almost since the day of its release back in August 2018.  It’s already been picked up by Fox 2000 for a film adaptation.

The story begins on October 30, 1969, when two young boys discover the body of Chase Andrews lying in swampy mud outside the small coastal town of Barkley Cove, North Carolina.  Andrews was well-known in the town.  He was a star high school quarterback and the son of one of the town’s wealthiest business owners.

Was his death an accident, or suicide, or murder?

Suspicion quickly falls on Catherine “Kya” Clark, a shy, reclusive young woman who has lived alone for years in a shack on the edge of the nearby marsh.  There isn’t much hard evidence, but Kya is different from the townsfolk.  She’s “the Marsh Girl,” a stranger even though she’s lived alongside them all her life.  She also had a relationship with Andrews a few years earlier, before he got married.

Where the Crawdads Sing isn’t a mystery in the traditional sense.  It tells both the story of Kya’s life starting from about age 6, and the investigation into Chase Andrews’s death and the subsequent murder trial.

Delia Owens writes beautifully.  Her descriptions of the marshlands where most of the novel takes place are detailed and lush.  She makes you feel both the density of marsh life and the complex interplay of land, water and sky.  Here’s one example early in the book when Kya ventures out in her father’s small motorboat by herself for the first time.

“Ducking beneath the low-hanging limbs of giant trees, she churned slowly through thicket for more than a hundred yards, as easy turtles slid from water-logs.  A floating mat of duckweed colored the water as green as the leafy ceiling, creating an emerald tunnel.  Finally, the trees parted, and she glided into a place of wide sky and reaching grasses, and the sounds of cawing birds.”  [p. 42]

Describing the little town of Barkley Cove, she writes,

“Together the marsh and the sea separated the village from the rest of the world, the only connection being the single-lane highway that limped into town on cracked cement and potholes.” [p. 16]

“Mostly, the village seemed tired of arguing with the elements, and simply sagged.” [p.17]

I liked the structure of the novel too, the way Owens interweaves Kya’s life story with the police investigation into Andrews’s death.  The two threads converge at the murder trial.

The book is well-paced. I never got bored, even though some of the chapters, especially the ones about Kya’s childhood, don’t have much action.  Owens does a great job building suspense through the trial, right up to the moment the jury announces their verdict.  And, no, of course I’m not going to reveal that!

One of the main themes of the novel is abandonment.  Kya is abandoned first by her mother.  Then her siblings slip away and later on her father disappears.  By age 10, she’s living alone at the edge of the marsh, learning how to survive.  Her friend Tate Walker teaches her to read but then abandons her when he goes off to college.  Andrews, her first boyfriend, marries a more conventional girl from the town.  Kya is shunned by the people of Barkley Cove.

Of course the impact of all this is exactly what you’d expect:  Kya has difficulty trusting anyone, or forming attachments.  But she also has difficulty forgiving, or showing much empathy for others.  Living alone, she doesn’t experience the normal flow of people in and out of our lives; school friends moving away, teachers coming and going, siblings growing up and going off to college.  Some of these departures are painful, and, yes, some of them are betrayals.  But most are just everyday life. Kya never has the opportunity to learn this.  Nor does she learn that sometimes we are the ones who move away or go off to college or take a job in another state or another country.

I don’t know how deeply Owens intended to explore the psychological impacts of abandonment, but I think she has cleverly created a character whose development has been stunted by it, and who, as a result isn’t quite fully three-dimensional.

I have one major reservation about Where the Crawdads Sing:  too many points in the story seem implausible.  For example, we’re supposed to believe that Kya survives alone, living at the edge of a marsh almost completely unaided, from the age of 10 into adulthood.  She is forced to become independent, self-sufficient and resourceful.  She also becomes reclusive, skittish when people approach unannounced, and yet somehow manages to escape becoming completely feral.  Now, I’ve read a lot of science fiction over the years and I’m pretty good at suspending disbelief for the sake of a good story, but this is a stretch.

If Kya’s isolated existence was the only dubious part of the novel, that would probably be OK.  But it’s not.

Despite having grown up mostly alone and attending school for just one day, Kya apparently develops a highly sophisticated set of skills.

Even Chase Andrews’s behavior is puzzling.  We can see he’s a womanizer and a scoundrel, but there’s no indication that he’s violent, until suddenly he is.

Individually, these are minor nits but they formed a set of distractions, like flickering grid lines on the holodeck of the Starship Enterprise, that kept me from becoming completely immersed in the rich and intricate world Owens has created.

Where the Crawdads Sing is extremely well-crafted, but I wasn’t fully captivated by the story.