In 2011, more minority babies were born in the United States than white babies for the first time.  In 2015, 24 of the largest 100 metropolitan areas in the US were already minority white.  By 2040 there will be no single racial majority in the US.  We will be a “majority-minority” country.

Demography, as they say, is destiny.

Diversity Explosion:  How New Racial Demographics are Remaking America, by demographer William H. Frey, is a big book of numbers that dives deep into population trends mainly from 1990 to 2010, the year of the most recent US census. The revised 2018 edition, which I read, includes an analysis of the election of Donald Trump.

Diversity Explosion is not a dry-as-toast academic study like you might expect.  Frey is a senior fellow at the Brookings Institution and research professor at the University of Michigan. He explores the demographic tide sweeping America in clear, approachable language illustrated with dozens of graphs and tables.  He doesn’t just recite the statistics; he also extrapolates about the likely social and political implications of our changing racial demographics.  These are actually the most interesting parts of the book.  Frey is surprisingly optimistic.

Before 1965, America’s immigration policy was explicitly racist.  Immigration law was designed to favor white immigrants from northern and western Europe and to strictly limit immigration from eastern and southern Europe and from Asia and Africa.  The goal of immigration policy was to freeze the demographic mix of the US population. It achieved this demographic stasis through a system based on national origin with quotas allocated according to the foreign-born US population from each country as recorded in the 1890 census.

The Immigration and Nationality Act of 1965, signed into law by President Johnson, established a “preference” system that favored relatives of US citizens and permanent residents, and professional and skilled workers.  While the Act maintained national quotas, immediate relatives were exempted from these numerical restrictions.  Essentially the INA of 1965 opened up large scale immigration to the US for Asians and Africans for the first time, and dramatically increased the number of immigrants overall.

America is still feeling the effects of this legislation today.

Previous US immigration policy was also explicitly homophobic.  So-called “sexual deviants” including homosexuals were prohibited from immigrating to the US until 1990.

An Explosion of Diversity

The 1965 INA set off an explosion of diversity that is changing the demographic make-up of the US population dramatically, rapidly and irreversibly.  Frey identifies four demographic trends that are reshaping America:

These demographic changes are “baked in.”  Even recent changes to immigration policy by the Trump Administration will do little to shift the trends.  That is because natural growth of minority populations is now larger than growth from immigration.  People of Mexican origin, for example, make up over 60% of the Hispanic population in the US.  But even though Mexican immigration has fallen in recent years, their population continues to increase through natural growth. 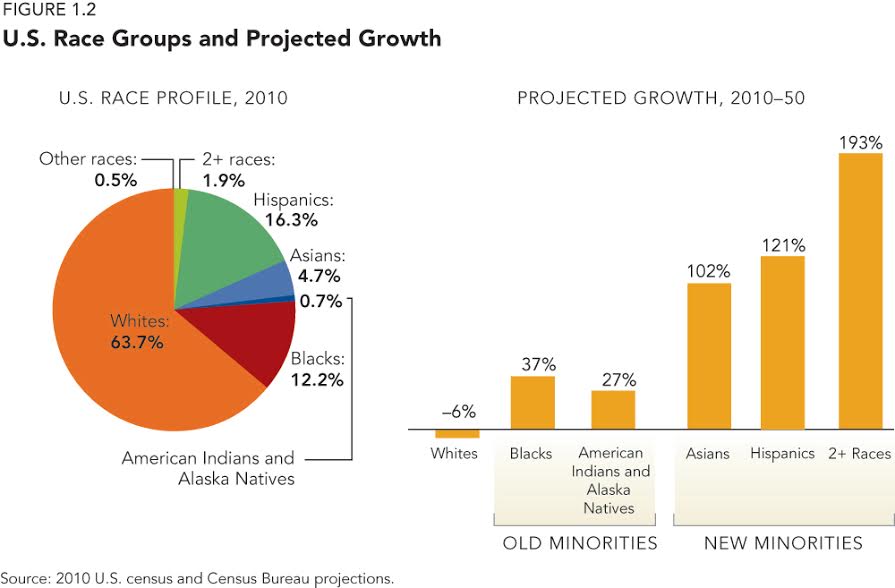 The implications of these trends for American society are profound.  First and foremost is the emergence of a “cultural generation gap”.  The US population over 50 is more than 70% white, with blacks being the largest minority.  On the other hand, young people in America, those 35 and under, are already 46% non-white.  This is leading to inter-generational or “grey vs. brown” conflicts.  You can already see disagreements between these starkly different groups in opinion polls on issues like gay rights, immigration policy and government expenditures on education and elder care.

We saw this play out in the election of 2016.  Donald Trump and Hilary Clinton focused on different sides of the cultural generation gap.  While Clinton won the popular vote, Trump had enough support from whites, especially in key northern battleground states in the industrial heartland, to win the electoral college.

That’s because, despite substantial gains in population, new minorities still make up a smaller portion of eligible voters than whites.  They are often younger – under 18 – or not yet citizens.  For example, in 2016:

In other words, the electorate is still significantly whiter and older than the US population as a whole.  This will correct itself as new minority communities age and become more established.

Over the long run, demographic trends favor the Democrats, Frey says.  The younger, more diverse segments of the population tend to be more liberal, more inclusive, and favor more active government.  But in the short term, as 2016 proved, Democrats cannot “hitch their hopes primarily to their younger, minority and urban base.”  On the other hand, for Republicans, appealing to blue-collar white voters in slow-growing battleground states is “not a long-term winning strategy”.  In other words (my words, not Frey’s), the Republican Party needs to come to its senses and realize that it cannot continue to alienate, let alone demonize, increasingly significant segments of the electorate.

As Frey puts it,

“… I believe that the demographic die is cast in a way that will ensure that the coming generations of what are now thought of as racial minorities will not just “fit in” but will hold sway in important ways in both public and private sector decisionmaking.” [p. 258]

That means both parties have an interest in bridging the cultural generation gap.

“To do so, they will have to persuade seniors that the key needs among striving young minorities – education, affordable housing, and steady employment – will work to benefit the Social Security and medical care programs that seniors will need in retirement.” [p. 230]

Frey is optimistic about the medium- to long-term implications of the diversity explosion.

Unlike other low-birth-rate countries like Italy, Germany and Japan with shrinking populations and shrinking economies, the US population continues to increase thanks to the growth of new minorities.  These communities not only keep the population growing, they bring new vitality, creativity and innovation to the country.

There should be a gradual softening of the boundaries between racial groups.  The geographic dispersion of new minorities across the country is reducing segregation in neighborhoods everywhere.  Equally important, there’s a growing segment of the US population who identify as multiracial.   By 2015, about 9.5% of all marriages in the US were interracial, and between 2011 and 2015, 16.2% of new marriages were interracial.  The children of interracial marriages now often identify as multiracial.  About 2.9% of the US population identified as multiracial on the 2010 census and this number likely understates the total.

I hope Frey is right.  If a majority of us identify as members of one or multiple minorities, and no single race dominates the others, perhaps there’s a chance that race itself will become a less important and a less poisonous issue in American society.