The Palace of Illusions

Reading The Palace of Illusions felt like seeing the ocean for the first time.

It’s beautiful and vast and awe-inspiring.  It’s unexpected and unforgettable.  And it beckons with the promise of undiscovered worlds beneath the surface and over the horizon.  It changes you. 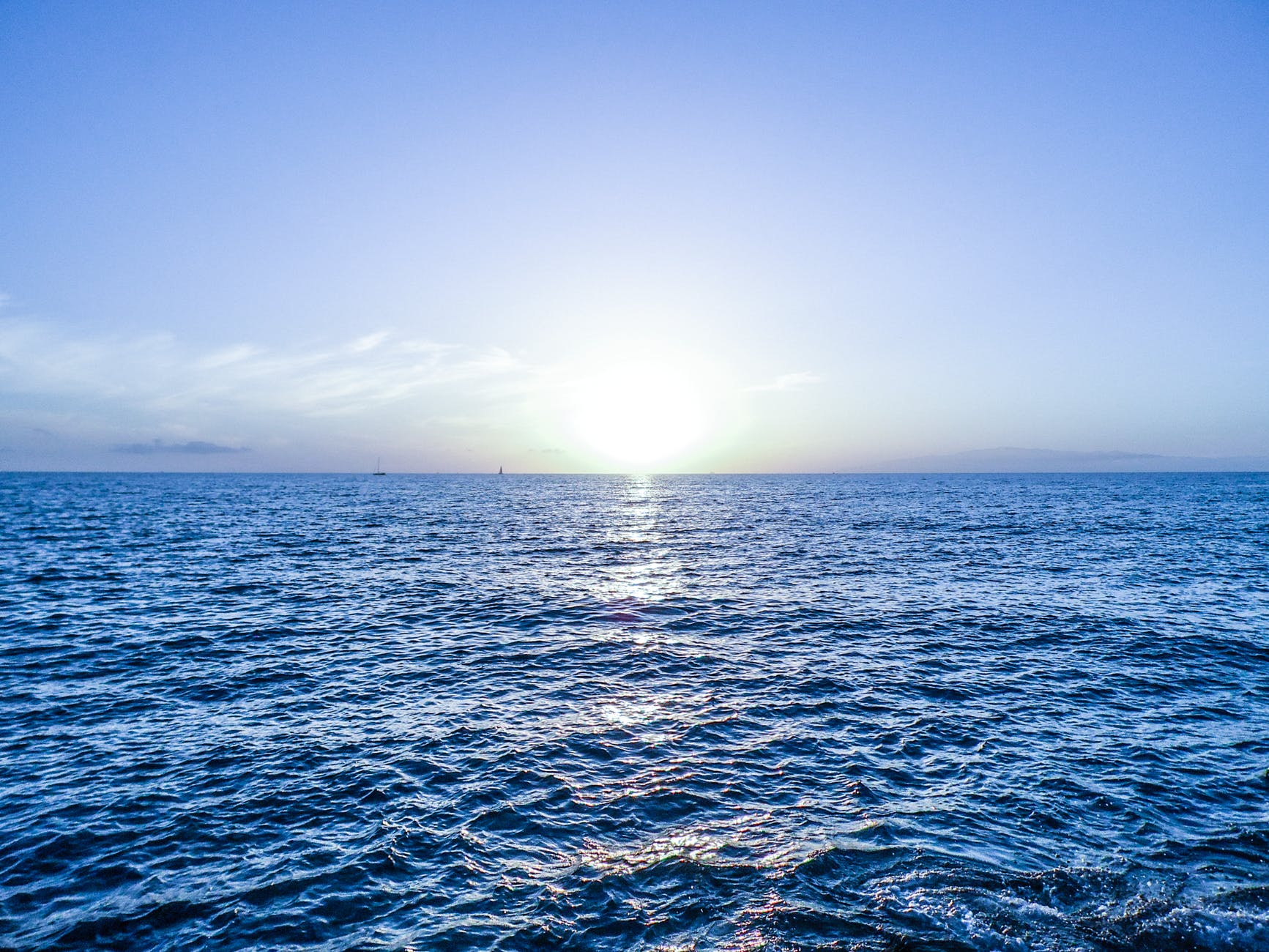 Photo by Peter Brown on Pexels.com

The Palace of Illusions is Chitra Divakaruni’s retelling of the classic Indian epic The Mahabharat from the perspective of a woman, the Princess Drapaudi, who later became known as Panchaali.  (There seems to be some variation in the spelling of these names. I’m using the spellings that Divakaruni uses in her book.)

The Mahabharat tells the story of the conflict between the Kauravas and the Pandavas, two rival branches of the same family.  The dispute is essentially a battle for succession of the throne of the Kingdom of Hastinapur.

The scope of the Mahabharat, its multi-generational timespan, its stories nested within stories, and its enormous cast of divine, semi-divine, magical and human characters is unequalled in Western literature.  The closest comparison would be the Iliad and the Odyssey by Homer, except that the Mahabharat is ten time longer than both of them combined.

I won’t even try to give a synopsis of the Mahabharat.  There’s no way I could do it justice.  But I do want to highlight a couple of key events in the story that will help set some context for The Palace of Illusions.

The Kauravas are led by Crown Prince Duryodhan and his 99 brothers. Yes, ninety-nine. Closely allied with the Kauravas is Duryodhan’s best friend, a warrior named Karna.

The Pandavas are led by five brothers and their mother, the matriarch Kunti. The most famous of the brothers is Arjun, the greatest warrior of his time.

In the midst of this drama, Drapaud, King of Panchaal, holds a swayamvar for his daughter Drapaudi.  Meaning “my husband”, a swayamvar was a ceremony at which a young woman would choose her husband from a group of suitors.  In Drapaudi’s case, the suitors were required to complete a task: they had to string a great steel bow and then shoot an arrow through the eye of a metal fish hanging from the ceiling while looking only at a reflection of the fish in a pool of water below.

Most of the suitors, kings from other lands, cannot not even string the bow, but Karna does.  But before he can shoot his arrow, Drapaudi rejects him due to his low-caste birth.  Arjun succeeds in shooting his arrow through the fish’s eye and, as is the custom, immediately marries Drapaudi.  Karna, humiliated, develops a life-long animosity towards Drapaudi and the Pandavas.

When they return home, the Pandava princes announce to their mother Kunti that Arjun has won a competition. She’s cooking at the time, inside a hut, and without looking around to see what Arjun has won, she tells him to share his prize equally with his brothers. Thus, Drapaudi becomes the wife of all five Pandavas.

There are plenty of examples of polygamy in literature, including the Bible, but I’m not aware of any other books featuring polyandry, let alone unapologetically as such a pivotal part of the story.  Very broad-minded!

The struggle between the two family branches culminates in the Kurukshetra War.  Before the battle begins, Arjun despairs of the violence and death the war will cause among people who really should love each other.  Krishna, serving temporarily in the humble role of Arjun’s charioteer, encourages him to fulfill his duty as a warrior and to uphold Dharma (meaning, very roughly, righteous living).  This conversation between Krishna and Arjun is apparently the most philosophical and the most famous part of the Mahabharat. It is called the Bhagavad Gita.

The Palace of Illusions is the story of the Mahabharat told in the first person by Drapaudi. In the original, she is fire-born, beautiful, head-strong and vengeful; a controversial character.  In The Palace of Illusions she is no less so, but we read her thoughts and reflections and perhaps understand better the reasons for her actions. 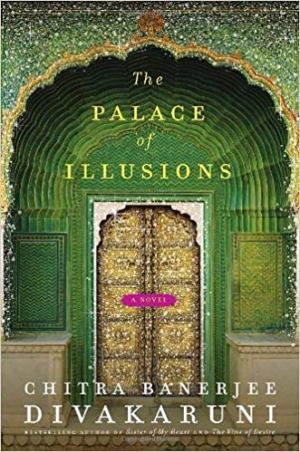 The book seems to preserve all the main events of the original story, with a couple of alterations. The first change is that Chitra Divakaruni imagines an undeclared and unfulfilled attraction between Drapaudi and Karna, two traditionally antagonistic characters. This is a daring and dramatic departure that casts much of the Mahabharat in a new light.  Despite having five husbands, Drapaudi actually loves Karna above all.  We read of her longing for him and of her regret that she has spoken or acted in ways that have hurt Karna.  Even more, she regrets that her words and actions have helped bring about a war.  Still, at key points in the story, anger and pride prevent either of them from showing even a little kindness towards the other. And only when it is far too late does Karna give any indication that he might have feelings for Drapaudi.

Second, just before the Kurukshetra War begins, Drapaudi is given a boon by the sage Vyasa enabling her to witness, as though present, critical parts of the fighting from a safe distance.  Through her eyes, we see the eighteen-day war and its terrible, tragic devastation.  We see Krishna driving Arjun in his chariot across the battlefield, counseling him to do his duty.  We see warriors who pledged to fight with honor resorting to dishonorable tactics in the heat of battle. I believe the events are unchanged from the original, but Vyasa’s gift is an artistic invention by Divakaruni that enables Drapaudi to narrate the war for us.

Lastly, there’s a lot of foreshadowing in The Palace of Illusions. As Drapaudi tells the story, she frequently refers to events, usually deaths, that will occur later on.  There’s so much foreshadowing that I found myself reading the book with growing dread.  Perhaps Divakaruni foreshadows so much because she anticipates most of her readers will already be familiar with the story.  Even if they haven’t read all of the Mahabharat, they’ll have read parts of it, or read abridged versions, or heard stories from it told by parents or teachers, or increasingly, they’ll have seen film or television adaptations.  Possibly Divakaruni is reassuring her readers that even though Drapaudi’s viewpoint may be different, the original story line is still being followed.

I was not familiar with the story, so there could be other differences or nuances that I completely missed.

One of the main themes of the book concerns the role of women.  That’s one of the reasons, I suppose, for telling the story from a woman’s viewpoint in the first place.  On the one hand, Drapaudi is treated like property, married off by her father to the Pandavas to advance his own political aims.  Then she is forced to marry all five of the brothers.  At one point, her enemies attempt to strip her naked in front of the entire Court of Hastinapur.  Her husbands are powerless to help her, but she is spared humiliation by Krishna who intervenes to cause her sari to become infinitely long.  Yet at the same time, Drapaudi is well-educated, an astute observer and a keen strategist.  Her husbands seek out and follow her advice.  She’s an effective Queen.  In the book we see her as a complex, capable and multi-dimensional character struggling with forces beyond her control.

This leads to another significant theme, for me anyway: the idea of destiny. In the West, most people believe in free will, in making a difference and, more recently, in having a growth mindset.  In other words, we believe in the idea of agency – that we are the agents directing the course of our own lives.  In contrast, as a young girl, Drapaudi is told that it is her destiny to bring about a great war in which “a million women will become widows because of you.” At the end of her life, as she lies dying on the side of a mountain in Northern India, Krishna appears to her and tells her, “You did what you were supposed to do. Played your part perfectly.” But if that was her destiny, could she have done anything else?  Could she have avoided humiliating Karna at the swayamvar, for example?  Did she have any choice?  Or would her choices have made any difference?  In The Palace of Illusions, and presumably in the Mahabharat too, destiny, the idea that we are just instruments and someone else is playing, seems to be accepted by the characters as a fact of life.  The notion that we can change our destinies is thus an illusion, and perhaps we construct entire palaces of such illusions over our lifetimes.  My own beliefs are strongly tilted towards individual agency, so the dichotomy in the book between destiny and agency really challenged my worldview and has made me reflect on it more.

I enjoyed The Palace of Illusions immensely. It was my first in-depth exposure to classic Indian literature. I don’t know if I will ever read the original Mahabharat in full, but The Palace of Illusions opened my eyes to an incredibly important and influential part of Indian culture that I had been totally ignorant of until now.  I’m looking forward to learning more.