I first encountered Tom Wolfe’s writing, or at least his books, as a young child, when a hardback copy of The Kandy-Kolored Tangerine-Flake Streamline Baby arrived at our house in Oakville, Ontario, about 25 miles west of Toronto. If I recall correctly, it came in the mail, probably as part of my mother’s subscription to the Book of the Month Club, which I’m stunned to discover, still exists. I don’t ever remember my parents actually reading the book, or discussing it at the dinner table, but it stood on top of the bookshelf in the living room for years. The title of course bemused me.

Later, as an adult, I read The Right Stuff when it first came out and then started working my way through Wolfe’s back-catalog which had been republished to capitalize on that book’s spectacular success. Now I have my own copy of The Kandy-Kolored Tangerine-Flake Streamline Baby, in paperback, its pages considerably yellowed, along with half a dozen more of his books. I’ve even got a file folder full of magazine articles by and about Wolfe that I’ve collected over the years.

I never read much of his fiction though, just The Bonfire of the Vanities. 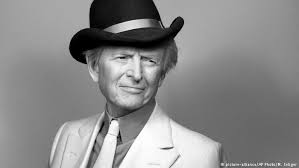 Two things inspired me about his writing, and still do. The first is the sheer exuberance and unapologetic over-the-top-ness of his writing style. That, combined with the sarcastic smirk which was his default literary stance. You could recognize a piece of Wolfe’s writing even without his by-line just from the style, much as you can instantly recognize Glenn Gould at the piano, or Mark Knopfler on guitar. I think his example encourages writers to find their own voice and to be confident about using it.

The second thing is what he wrote about, which was essentially anything and everything. He delved into the nooks and crannies of American culture with seemingly unending curiosity. I learned much of what I know about modern architecture from his book From Bauhaus to Our House, and about post-modern art from The Painted Word. And for anyone interested in the tech industry, his lengthy 1983 Esquire essay, The Tinkerings of Robert Noyce, is probably the definitive origin story of Silicon Valley. He proved you can find interesting, compelling people and stories just about anywhere you look.

In a 1989 article in Harper’s Magazine, Wolfe, reflecting on both these aspects of his writing, pointed out that most people who decide to become writers do so because “they realize they have a certain musical facility with words.” Very soon, though, writers must confront the “damnable problem of material,” of what to write about.

Tom Wolfe wrote mainly in scherzo, with virtuosity and flair, drawing upon the inexhaustible supply of material he found in modern American life.

The Tinkerings of Robert Noyce: How the Sun Rose on Silicon Valley
Esquire Magazine, December 1983