Book Review: After the Prophet

After the Prophet:  The Epic Story of the Shia-Sunni Split
By Lesley Hazleton
Anchor Books, New York, 2009

This no doubt heretical thought struck me forcefully as I read Lesley Hazleton’s engrossing book After the Prophet:  The Epic Story of the Shia-Sunni Split.

Starting from the death of Muhammad in 632, After the Prophet tells the tragic and bloody story of how Islam split into the Sunni and Shia divisions we know today.  Muhammad had no male children, and no clearly designated heir.  Jockeying for favor and advantage began among his family and associates even before he died.  The book centers around the conflict between Aisha, the youngest of Muhammad’s nine wives, and Ali, his first cousin and son-in-law.  It tells how bloodshed, schism and civil war unfolded in the years following Muhammad’s death.  Not only has this conflict never been resolved, it’s impact today extends well beyond Arabia and the Middle East.

Hazleton, a Seattle area author and blogger, aka The Accidental Theologist, and – full disclosure – a former writing instructor of mine, has turned this important history into a fascinating and well-told narrative that’s hard to put down.  (I’d call it a “gripping page-turner” if Lesley hadn’t drummed into me and my classmates a strong injunction against clichés.)  For readers like me who know nothing about the culture of 7th Century Arabia, Hazleton does an excellent job setting context.  For example, families didn’t resemble trees back then, she informs us.  Instead they were a complex latticework of relationships which often created conflicting loyalties and obligations. 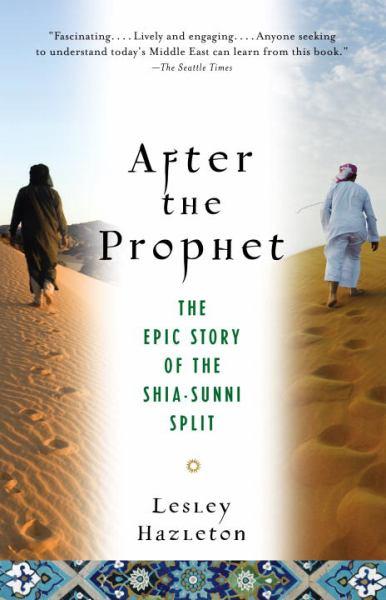 The book is noticeably sympathetic to the Shia, literally “the followers of Ali.”  It begs the question of how Sunni sympathizers might tell this story.  I would also like to have learned more about the theological differences between the two sides, either causing or arising from the schism.  Nonetheless, After the Prophet makes excellent reading for anyone trying to understand the many interlocking conflicts in the Middle East today.

That’s what triggered the fanciful idea of Muhammad reading Machiavelli — not so much The Prince as The Discourses.  In The Discourses, Machiavelli talks about the importance of leaders creating laws and institutions that will outlast them, that will solidify their accomplishments so they transcend a single human lifetime.

Muhammad wasn’t trying to found a republic or a city-state, of course.  He founded one of the world’s greatest religions.  Yet to preserve intact the Islamic community he forged during his lifetime, lasting political structures were clearly needed.  So it’s both curious and tragic that Muhammad did not clearly designate a successor, and more importantly did not define the process by which successors would be chosen.

Perhaps he tried.  Hazleton suggests this possibility in describing an incident known as The Episode of Pen and Paper.  Perhaps death came upon him too suddenly.  However, I can’t help but wonder what would have been the consequences for Islam and for the whole world if he had succeeded.

This entry was posted in Books. Bookmark the permalink.

1 Response to Book Review: After the Prophet