“White Fragility” sounds like a paradox. How can whites be fragile when we’re supposed to be the largest and smost dominant segment of US society?

As author Robin DiAngelo explains it, whenever whites are confronted with racism, we become very uncomfortable and defensive. We resort to a whole set of emotions and behaviors like anger, fear, silence, and withdrawal that,

“… work to reinstate white equilibrium as they repel the challenge, return our racial comfort, and maintain our dominance within the racial hierarchy. I conceptualize this process as white fragility. Though white fragility is triggered by discomfort and anxiety, it is born of superiority and entitlement. White fragility is not weakness per se. In fact, it is a powerful means of white racial control and the protection of white advantage.” [p. 2]

White Fragility: Why It’s So Hard For White People To Talk About Racism is DiAngelo’s highly acclaimed examination of this insidious method of social control and what we must do about it to make progress on racial justice.

Robin DiAngelo is an author, lecturer and Affiliate Associate Professor at the University of Washington in Seattle.  She’s been a consultant and educator on racial and social justice issues for over twenty years. Throughout the book she draws on her experiences working with government, corporate and non-profit organizations.

DiAngelo says that white people don’t see ourselves in racial terms.  We’re “just human.”  Everyone else belongs to a race.  And we like it that way. It means we’re dominant, we define the standards, we get all the advantages and privileges.  But it also means that most of us don’t understand racism at all.  We have a simplistic view that racism consists of individual actions by not-nice people, when in fact racism is a system.

“For most whites, however, racism is like murder: the concept exists, but someone has to commit it in order for it to happen. This limited view of such a multilayered syndrome cultivates the sinister nature of racism and, in fact, perpetuates racist phenomena rather than eradicates them.”  [p. 72]

Most of us see racism in personal, good/bad binary terms, like this:  Racism is bad. I am a good person therefore I cannot be racist.  Accusing me of racist behavior is a direct attack on my moral character. It’s upsetting!  It’s intolerable!

And that reaction triggers the defenses of white fragility and shuts down all discussion.

But to understand racism as a system, and to understand how we benefit from it and are complicit in it, we have to see racism as something larger than individual behavior or character.

“The simplistic idea that racism is limited to individual intentional acts committed by unkind people is at the root of virtually all white defensiveness on this topic. To move beyond defensiveness, we have to let go of this common belief. “  [p. 73]

Early in the book, DiAngelo provides a set of useful definitions that I think are worth repeating here because they frame the rest of the book and lead us to a deeper and more systemic understanding of racism.

Prejudice: “Prejudice is pre-judgment about another person based on the social groups to which that person belongs. Prejudice consists of thoughts and feelings, including stereotypes, attitudes, and generalizations that are based on little or no experience and then are projected onto everyone from that group.” [p. 19]

We all have prejudices.  They’re unavoidable.  And they tend to be shared by the people in our social groups,.

Discrimination: “Discrimination is action based on prejudice. These actions include ignoring, exclusion, threats, ridicule, slander, and violence.”  [p. 20]

Racism: “When a racial group’s collective prejudice is backed by the power of legal authority and institutional control, it is transformed into racism, a far-reaching system that functions independently from the intentions or self-images of individual actors.” [p. 20]

White supremacy: “… the all-encompassing centrality and assumed superiority of people defined and perceived as white and the practices based on this assumption. White supremacy in this context does not refer to individual white people and their individual intentions or actions but to an overarching political, economic, and social system of domination. Again, racism is a structure, not an event.” [p. 28]

DiAngelo explores how white fragility reinforces white supremacy by closing off uncomfortable conversations and rendering change impossible.  She describes one powerful example of this in a chapter called White Women’s Tears.

“Whether intended or not, when a white woman cries over some aspect of racism, all the attention immediately goes to her, demanding time, energy and attention from everyone in the room when they should be focused on ameliorating racism. While she is given attention, the people of color are yet again abandoned and/or blamed.” [p. 134]

The self-reinforcing mechanisms of white fragility strike me as a daunting, even depressing, obstacle to progress.  How can we address issues of racism when even just talking about it triggers defenses that make change impossible?

The final chapter of the book contains strategies for having open and productive conversations about race without triggering white fragility. 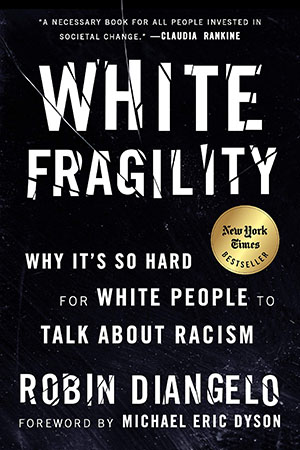 I learned different things from each of these books. Kendi focuses on the need to reform racist policies.  DiAngelo talks about how whites are socialized into both white supremacy and white fragility. And Oluo give guidance on how to engage in uncomfortable conversations about race.

However, they all have one message in common: Racism is a system of oppression; a web of laws, policies, socialization and discrimination.  It’s not just nasty people saying the n-word.  To understand the system deeply and to make progress in changing it, we must learn how to participate in those uncomfortable conversations.  That means accepting the fact that even though we may do our very best not to commit individual acts of racism, we white people still benefit from the system of white supremacy and we have the responsibility for changing it.

Yes, it’s important to speak up against individual racist actions, but as DiAngelo says,

“… we must also be careful not to use them to keep ourselves on the “good” side of a false binary. I have found it much more useful to think of myself as on a continuum. Racism is so deeply woven into the fabric of our society that I do not see myself escaping from that continuum in my lifetime. But I can continually seek to move further along it. I am not in a fixed position on the continuum; my position is dictated by what I am actually doing at a. given time.”  [p. 87]

Whites, myself included, need to help transform the protests of the current moment into lasting progress on racial justice.  But that requires us to move along the continuum to understand and confront our own roles in reinforcing systemic racism.