Notes on An Insurrection

I usually post book reviews on this blog, but the books about Wednesday’s armed insurrection by a mob of violent white supremacists at the US Capitol, instigated by Donald Trump, have not yet been written. I’m not going to wait. Until those books are published, we’ll have to make do with the reports of journalists and commentators.

In this post I’m going to highlight some articles and essays that I’ve found most insightful. I’ll be adding to this list in the weeks and months to come.

I hope you find these useful too.

It Was No Accident

Let’s start with a first-hand account. Pramila Jayapal is the Democratic congresswoman representing Washington State’s 7th District. She was trapped in the Capitol gallery during the riot. In this interview by Rebecca Traister in The Cut she recounts her thoughts and experiences.

‘It Was No Accident’ Congresswoman Pramila Jayapal on Surviving the Siege, by Rebecca Traister in The Cut.

As a woman of color, Jayapal felt particularly vulnerable – she could not hide or blend in with the crowd. She was equally concerned for the safety of her female colleagues. She tells how she was relieved to notice very few women on the floor of the House when the insurrectionists broke in.

It’s clear from Jayapal’s account that Congress and Capitol Police had plenty of warnings about the January 6 demonstration and the potential for violence.

And her main point: this was no accident.

“The lack of security at the Capitol is not an accident. It is very clear to me that there were breaches of our law-enforcement agencies. The fact that there were no barriers, that they were essentially allowed in. And again, the discrepancy of what would have happened if these had been peaceful Black Lives Matter protesters … Believe me, they would not have been anywhere near that building. And there would have been a lot of arrests.”

As a final insult, Jayapal is now quarantining because she was moved to a secure location with about 100 other people, including many Republicans who were not wearing masks.

Update (Jan. 12, 2021): As she feared, Pramila Jayapal has now tested positive for coronavirus after sheltering in a crowded room for several hours with some Republicans who refused to wear masks.

“Our lives and our livelihoods are at risk, and anyone who refuses to wear a mask should be fully held accountable for endangering our lives because of their selfish idiocy.”

The Privilege of Not Being Taken Seriously

Writing in The New Yorker, Masha Gessen, author of Surviving Autocracy (book, review) argues that one possible reason why there was so little security is that the insurrectionists were not taken seriously by Capitol Police.

The Capitol Invaders Enjoyed the Privilege of Not Being Taken Seriously by Masha Gessen in The New Yorker.

An armed mob storming Congress seemed familiar enough to authorities to be dismissed as clowns. Photograph by Leah Millis / Reuters

Paradoxically, Gessen calls this a privilege. It’s a privilege because white supremacists were not seen as a threat by predominantly white police. They were not seen as other, whereas Black Lives Matter protesters were other to the police and were met with force and aggression as a result.

“Black Lives Matter protesters are other to the Capitol Police. So are survivors of sexual assault or women who protest for the right to choose. But an armed mob storming the Capitol, and their Instigator-in-Chief, are, apparently, familiar enough to be dismissed as clowns.”

Gessen notes that more people were arrested protesting the confirmation hearings of Brett Kavanaugh to the Supreme Court in September 2018 than were arrested on January 6th invading the Capitol.

“The invaders may be full of contempt for a system that they think doesn’t represent them, but on Wednesday they managed to prove that it does. The system, which shrugged off their violence like it had been a toddler’s tantrum, represents them. It’s the rest of us it’s failing to protect.”

Many, many reporters noted the discrepancies between how police treated insurrectionists on Wednesday compared to their treatment of Black Lives Matter protesters earlier this year. Nicole Chavez at CNN.com wrote this article which shows the difference in a dramatic set of comparative photographs.

Rioters breached US Capitol security on Wednesday. This was the police response when it was Black protesters on DC streets last year by Nicole Chavez at CNN.com.

National Guard troops deployed at the Lincoln Memorial on June 2, 2020, during protests held in Washington, DC, over the death of George Floyd. Source cnn.com

This picture, for example, shows National Guard troops deployed at the Lincoln Memorial during protests in Washington, DC on June 2, 2020  over the murder of George Floyd.

So Do the Numbers

This report by Maggie Keorth at FiveThirtyEight.com, highlights recent research comparing police responses to demonstrations by right-wing and left-wing protesters

The research was conducted by Roudabeh Kishi and her team at the nonprofit Armed Conflict Location & Event Data Project. Though the data set is limited, the research showed police more than twice as likely to break up left-wing protests, mainly Black Lives Matter demonstrations, than right-wing ones, and were more likely to use force when they did so.

Still, last Wednesday, one pro-Trump demonstrator was shot and killed by Capitol Police. A professor of criminology cited in this article suggests that right-wing groups may now believe the police have broken some sort of “implicit pact” of tacit support and may respond with even more destructive behavior.

In addition, police, stung by criticism for their weak response, may respond with more force, perhaps against both left- and right-wing protesters.

Wednesday’s insurrection at the Capitol was a step function escalation in violence by the right. It is likely to result in more violent protests and more violent responses from law enforcement.

By far the most thoughtful analysis of the insurrection and the history surrounding it comes from Timothy Snyder, Levin professor of history at Yale University.

The American Abyss by Timothy Snyder in The New York Times. 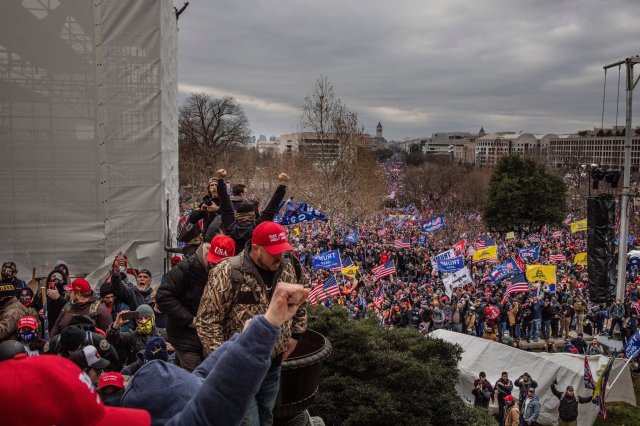 Outside the Capitol, the crowd cheered as rioters stampeded into the building, 2:10 p.m. Photo: Ashley Gilbertson/VII, for The New York Times

In this lengthy New York Times essay, Professor Snyder divides the Republican caucus into two groups: gamers and breakers. The gamers are happy to game the current system to maintain power with a minority of voters. Chief among them is Mitch McConnell. The breakers on the other hand, let by Senators Josh Hawley and Ted Cruz are aiming to break the system and have power without democracy.

The breakers are seriously dangerous people. By supporting Trump’s big lie that the 2020 election was stolen, the breakers have set a precedent for all future Republican presidential candidates to challenge the legitimacy of any election which they lose. Even without a shred of evidence.

Trump, of course, has never accepted the legitimacy of American elections. Even in 2016, despite his win, he claimed without evidence that millions of people fraudulently voted for Hilary Clinton. His big lie of a stolen election in 2020 is simply a continuation. It’s focused on a few key states, with large urban centers where Black people live and vote.

“At bottom, the fantasy of fraud is that of a crime committed by Black people against white people.”

The lie will persist long after Trump fades from the scene, carried forward by the likes of Cruz and Hawley. The prospects for further violence and insurrection in 2024, as Snyder presents them, are frightening. America, Snyder says, needs concerted action and a renewed commitment to facts and truth.

“The racism structured into every aspect of the coup attempt is a call to heed our own history. Serious attention to the past helps us to see risks but also suggests future possibility. We cannot be a democratic republic if we tell lies about race, big or small. Democracy is not about minimizing the vote nor ignoring it, neither a matter of gaming nor of breaking a system, but of accepting the equality of others, heeding their voices and counting their votes.”

If you read only one of the articles I’ve listed here, I recommend this one.

“As Christian Nationalist As It Gets”

Update (Jan. 30, 2021): Thomas Edsell, writing in The New York Times, explores the movement known as Christian Nationalism and its close ties to the far right, including the movement’s influence and participation in the January 6, 2021 insurrection. It’s a really good survey article. He’s spoken to a number of prominent researchers and commentators, and provides links to their books and articles.

Here’s a quote from one of his sources about the nature of Christian Nationalism.

“It includes assumptions of nativism, white supremacy, patriarchy and heteronormativity, along with divine sanction for authoritarian control and militarism. It is as ethnic and political as it is religious.”

Many more, equally alarming in the article.

Echoing some ideas from the book Caste by Isabel Wilkerson (book, review), I think the insurrection on January 6 wasn’t so much about the 2020 election or even 2024 but about 2042. That’s the year the US Census Bureau predicts whites will no longer make up a majority of the American population. White supremacists, like the people who invaded the Capitol last week, see this coming. They’re trying to hold onto their power and privilege against the demographic tide. They showed last week that they prefer a white America over a democratic America.

If you’ve read any other articles or analysis about these events that you found particularly helpful, please let me know in a comment.  Thanks.

Update (Jan. 6, 2022): President Biden addressed the nation on the one year anniversary of the insurrection at the Capitol. The transcript is here.

This entry was posted in Politics and tagged 2020 election, Donald Trump, insurrection, racism. Bookmark the permalink.

2 Responses to Notes on An Insurrection