The Narrow Road to the Deep North

The Narrow Road to the Deep North
By Richard Flanagan
Alfred A. Knopf, New York, 2014

The Narrow Road to the Deep North is brilliantly written and utterly harrowing.

During World War II, an estimated 200,000 Asian civilian laborers and 60,000 Allied prisoners of war were used as forced labor by the Japanese Imperial Army to build a 415 km railway linking Bangkok, Thailand and Rangoon, Burma (now Myanmar). About 60,000 civilians and over 12,000 Allied POWs died during construction of the Thai-Burma Railway, also known as the Death Railway.

The movie Bridge on the River Kwai is loosely based around these events.

Among the POWs forced to work on the railway were about 13,000 Australians, of whom more than 2,700 died. 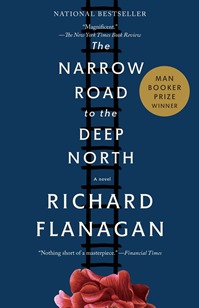 The Narrow Road to the Deep North tells the life story of Dorrigo Evans, an Australian Army doctor, the senior officer among a group of Australian POWs, who tries to care for his men under brutal conditions. While the POW experience forms the heart of the novel, Richard Flanagan shows how even the survivors are profoundly damaged by war. Dorrigo Evans’ life in particular seems to be battered by malevolent random forces and missed opportunities.

Flanagan’s writing is extraordinarily powerful, especially in the imagery he uses to portray the suffering and the deaths of the POWs.

The novel takes its title from a book of the same name by the 17th Century Japanese haiku poet Basho. That book describes in prose and poetry Basho’s 2,500 km journey on foot from Tokyo to Tohoku in the northeast corner of the main island of Honshu. It’s essentially travelogue. There’s bitter, and I assume deliberate, irony in using the title of that book, an important work of Japanese literature, as the title of a novel depicting prisoners of war forced to build a road for their Japanese captors.

I’m not doing this book justice at all. It’s complex and deep, and probably needs several readings to be fully appreciated. It’s forceful and compelling and definitely worth reading, but it’s also dark and tragic and not for everyone.

2 Responses to The Narrow Road to the Deep North