Right up until the last moment, I debated whether or not to take my inline skating gear with me on our family trip to Australia.  I knew we’d be visiting some remote areas and small towns, and spending lots of time with family and friends, so I wasn’t at all sure I’d have many chances to skate.  Plus, all that gear took up over a quarter of my suitcase.  Not everyone can travel as light as Eddy Matzger.

In the end I applied the Regret Rule and took them.  The Regret Rule is one of my personal decision-making heuristics.  Most of the time we look back on events in our lives and regret the things we did not do more than the things we did do.  So, in this case, I figured I would regret not having my skates if the opportunity arose to use them, more that I’d regret the hassle of schlepping them around.

Over our three week trip I skated only four times, but I’m really glad I took my skates with me.

We spent the first four days of our trip in Sydney and I was able to skate in the morning of three of those days.  The first and third mornings, I skated through Darling Harbor (well, the Australians spell it “Harbour”)  just outside Sydney’s main downtown area.  Darling Harbor was once a derelict warehouse and wharf district, but it’s been redeveloped into a busy pedestrian entertainment area with shops, restaurants, museums and the Sydney Aquarium.  But at 7:00am there’s virtually no one around.  For skaters, there’s a variety of surfaces to test your skills.  Most of Darling Harbor is paved with red bricks.  There are also boardwalks, stretches of concrete with embedded railroad tracks, and some pristine smooth asphalt around the apartment buildings at the northern end.  And there’s lots of water, in the harbor itself and in fountains and pools, to avoid falling into.

My only near mishap occurred when I failed to realize until much too late that the boardwalk I was skating along transitioned to concrete via a flight of four steps.  I had no time to turn or stop.  I remember thinking, “Uh oh, this is going to leave a mark!” then hearing my skates go thump-thump-thump down the stairs.  I startled a passing pedestrian with a triumphant “Ha!” as I hit the concrete and with only a slight wobble continued on my merry way.  Pete’s endless drills skating off the carpeted curb at Skate King must have kicked in somehow.  My kids, when I told them about the incident, thought it was a rare occurrence of Dad being cool. 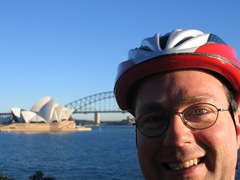 Next morning I skated through Hyde Park and the Botanical Gardens out to Mrs. Macquarie’s Chair.  The path through Hyde Park is composed of polished granite slabs, but the rest of the trail was quite rough and I had to cross some busy city streets.  So this route wasn’t as much fun.  On the other hand the view was great.

My last skate was just a brief sprint on a trail running along the ocean in the South Australian town of Victor Harbor. There was a pod of Southern Right Whales feeding and frolicking just off shore.

I discovered one side benefit of packing skates:  They provide great protection for wine bottles!  We visited a number of boutique wineries in the Coonawarra region and came back with quite a selection.  A bottle of Rymill 2007 Traminer desert wine traveled home safely nestled inside each skate.

So next time you’re taking a trip, pack your skates!

This entry was posted in Inline skating. Bookmark the permalink.